a firsthand look at how a popular brand handles a crisis

I’m sitting in a hotel room at a Disney resort as Hurricane Matthew roars up along the Florida coast. We arrived in Orlando on Sunday, October 2 when there was the slight possibility that the hurricane could hit Florida. Once you’re at the resort and theme parks, you tend to forget about the outside world and get swept into the Disney utopia they’ve carefully crafted for their brand. Here, everything is always clean, the employees are friendly and there are plenty of rides, shows and attractions to make just about anyone happy.

By Wednesday, it was becoming clear that the hurricane would hit the central Florida coast and the Orlando area could receive wind gusts up to 60 or 75 miles per hour. On Thursday morning, they announced that all parks would be closing that day at 5 p.m. and would be closed all day on Friday.

When we arrived back at the hotel Thursday evening, we discovered a long line of people snaking in circles around the lobby. A cheerful young m 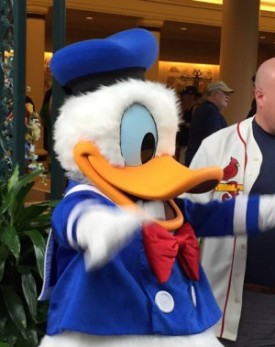 an, who apparently is normally the lifeguard, explained that everyone was lined up to order food from the resort’s only restaurant. Unfortunately, during our stay, our food court had been closed for renovations leaving only one small restaurant and a temporary area selling drinks and snacks. He said that most likely the restaurant would not be open again until Friday at suppertime so we should order accordingly, and in addition to the menu there would be boxed lunches available. We waited in line for four hours. What was interesting was that there were no harsh words or angry outbursts that you might expect under such circumstances. The young staff remained cheerfully apologetic throughout the night. Donald Duck and Pluto showed up around 9:30 p.m. to mingle with the crowd. And despite the massive amount of people served, the only thing they ran out of was meatball sandwiches.

Some takeaway lessons for other businesses:

1. Planning for potential crises will lessen the impact on your brand.

Even though there have only been four other times that Disney parks have closed in its history, it was clear that they had a plan for how to deal with this. They moved food and employees around, and changed their menu to accommodate the situation. They even had a few characters show up to keep the mood upbeat. Too many businesses don’t plan for potential problems and suffer a lot of backlash and damage to their reputation.

2. Good customer service can be a powerful part of your brand.

The fact that the people in the food line didn’t become hostile is owed in large part to the staff. Their approach to the customers made a huge difference. It was obviously a severely stressful situation for them as well, but they never let it show in front of the customers.

3. A great reputation can help your business in times of trouble.

Because Disney consistently delivers quality service to large groups of people, there was not the amount of concern or panic you might expect under such circumstances. People trusted that they would be taken care of and this helped to lessen the anxiety and fear.

In the end, the hurricane tracked farther east so the rain and wind was much less severe. The restaurant opened for lunch and by 2 p.m. a crewmember was power-washing debris from the sidewalks. Time to get back to the magic!

is this good design?