As many of you probably heard, a new logo was released for one of the most well known companies in the world: Google. With this launch of a new logo came a plethora of opinions, some good, and some bad.

Emmy award-winning art director and designer James Victore was unimpressed with the logo, saying, “If they were actually a brave company, they could make a completely abstracted logo and everybody around the world would know it. But they don’t need an intelligent, beautiful logo because they’ve got an omnipresent logo.”

Why did Google make this bold move? Evolution. The way people use Google has changed since the company first began. “We’ve taken the Google logo and branding, which were originally built for a single desktop browser page, and updated them for a world of seamless computing across an endless number of devices,” said Google’s Tamar Yehoshua and Bobby Nath in a blog post announcing the change. 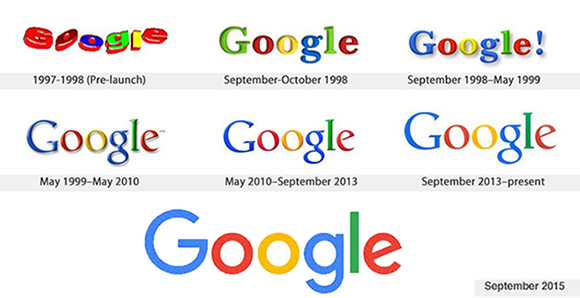 As a business, you are your logo. It’s usually the first thing a person sees when they view your company website, stationery, or business card; it’s your identity. Much like an interview or first date, first impressions are everything.

Did you catch the brief nanosecond Gap changed their logo back in 2010? We didn’t think so. Their jump to a more modern and bold configuration was too much for Gap loyalists and spun the company into a backpedaling PR crisis, finally resulting in reinstating the original logo.

Kentucky Fried Chicken stands on top of the heap with their four successful logo redesigns over the food chain’s extensive history. They recognized early on our love for the Colonel and have modernized the styling of the brand over the years, while keeping the familiarity of the Colonel Sanders.

So, as the earth realigns in the wake of Google’s new logo release, we are applying lessons of the past as we embark on a brand revamp of one of our clients, who realized their senior market was evolving from the WWII generation to the baby boomer generation. Our solution will remain recognizable to current clients, while a cleaner design and a more engaging palate will breathe some fresh air into the company’s bellows.

What have we learned from the likes of Google, Gap and Kentucky Fried Chicken? Tackling a logo redesign should not necessarily mean a rebrand but more so a facelift of a company’s current identity. Don’t get us wrong, in rare instances, a full rebranding is necessary due to various situations. For most though, a freshening up will make a huge difference and help keep the company moving forward and evolving with the rest of the world.

from one star to five stars: handling negative online reviews